The Scriptor Tab is where you design the logic driving each scene. You can set player choices, write dialogues, or plan actions in the Scriptor Tab, by creating nodes and setting relationships between them. From the Variables tab, the following functions can be accessed:

You can change the value of any variable by double-clicking it, and putting the desired value in the value box.

By clicking this button, you can create new global variables. The screen that appears to do this is shown below: A global variable has the following attributes:

The name of the variable. This can be whatever you want.

The variable type. Possible types include: Integer, float, string, boolean, and 'none'. Different variable types allow for different types of data to be stored.

You can set an initial value for the new variable here. This value should fit the variable type set above; if this does not match, StudyCrafter sets the variable to 'empty'.

Click this little triangle buttons, you can hide or expand global and object variable group. For the variables in these groups, you can also click those buttons to hide or expand the values of each variable.

Every StudyCrafter scene starts from a Start node. By clicking, dragging, then releasing the yellow ball, StudyCrafter will give you the option to create a new node that is directly connected to the Start node. The image below shows what this looks like: A brief overview of the node types is presented here; for a more comprehensive overview, see the Node Types page.

This node adds dialogue to the scene.

This node allows characters or assets to undertake actions, such as moving, resizing, or appearing/disappearing from the scene.

This node presents the player with a choice, and allows you to branch the scene logic based on that choice.

This node branches off the scene logic based on predetermined criteria. It can also be used to randomly send players down one branch.

This node lets you change the value of any Global Variable, or any Object Variable in the current scene.

This node lets you play a sound.

This node lets you tell StudyCrafter to look for a certain type of 'event', e.g. a mouse click or a certain button press, or the passage of a certain amount of time. When this event happens, the node and any nodes attached to them become active.

This node lets you define a 'function', consisting of a number of connected nodes. The Function node and any connected nodes are inactive unless 'called'.

This node lets you 'call' a previously-defined Function Node, activating it and any connected nodes.

The Mini-Map shows the thumbnail of the scene. If you move your mouse above it, it will show the X/Y coordinates of the place you are pointing. If you encounter any bugs while using StudyCrafter, click the Report Bug button to let us know. The bug report window is shown below. 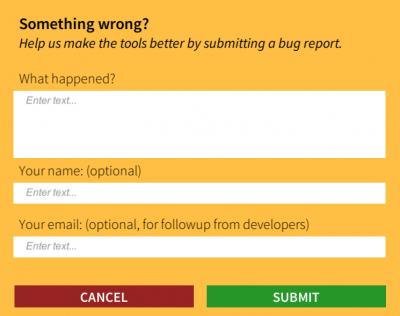 Click the Play Button to play your game from the selected scene. Note: If your game is not designed to be started from this scene, this may cause some anomalous effects.

Click this button to go back to the Projects Screen.